British heavyweight Dillian Whyte believes he is ready to 'smash Deontay Wilders' face in' if a heavyweight clash between the pair can be agreed for next year following the rumoured withdrawal of Alexander Povetkin due to his ongoing recovery from Covid-19.

The Brixton fighter was stopped by Alexander Povetkin during the summer where he lost his WBC mandatory world title status for Tyson Fury's belt.

While the 'Bronze Bomber' continues to be in mediation for a third match-up with Fury due to the clause on the contract that reportedly stipulates the pair meet again irrespective of negotiations breaking down earlier in November.

Whyte has expressed his desire to fight his heavyweight rival Wilder, but has questioned how serious the claim is due to his languishing continued pursuit of another brawl with Tyson Fury.

"I would love to smash Deontay Wilder's face in," Whyte told Sky Sports. "It's one of those fights where I would be very charged up. I would go out in the first round and just get going after him.

"It is frustrating, but it's still a big name. He's one of the top guys and I would love to fight him.

"How serious is he?"

However, the 32-year-old admits he is frustrated as he feels that many of the fighters that have called his name in recent weeks such as Joseph Parker and Wilder have rejected previous fight opportunities in the past, and are only calling his name due to his loss to Povetkin in August. 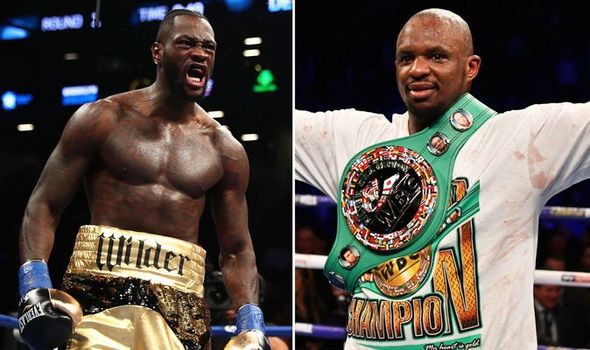 When people mention Deontay Wilder's name to me, I just get stressed," said Whyte. "It's crazy, because once again someone else wants to fight me.

In my mindset, there's only five fights for me," said Whyte. "If I get those five fights, then I'm happy to call it a day, to be honest. I don't want any of these guys to retire. It depends on what these guys are doing. I might have to do more, but if I get the five fights I want.

Those fights should be Povetkin, Luis Ortiz, Wilder, Fury, Joshua. Fight those guys then I've fought everyone I can fight. Even now, Povektin keeps delaying it, saying he's sick. I'm like, 'Okay, that's fine, I want you to be at your best when I fight you'.

"Have as much time as you want, let me fight Luis Ortiz in February, and then I'll fight you later in the year."