Ukranian heavyweight Oleksandr Usyk may be offered a deal to face Anthony Joshua after an undisputed clash between Joshua and Tyson Fury, retaining his status as WBO mandatory challenger.

The southpaw defeated Dereck Chisora back in October in his second heavyweight fight by unanimous decision, after moving up from the cruiserweight division after becoming undisputed champion at the lower weight.

Usyk has a desire to become undisputed champion at the higher weight proving wrong any doubters over his power and physical shape, and will reportedly not accept any step-aside deal from the WBO, insisting that he instead fights for the eventually vacated title by Anthony Joshua against either Joseph Parker or Joe Joyce in 2021.

However Eddie Hearn the promoter of both Usyk and Joshua, is reported to be planning a deal in which Joshua can fight his fellow Briton in a mega undisputed clash in the new year with the WBO title on the line, before the winner takes on the former undisputed cruiserweight champion for the undisputed heavyweight crown later in the year. 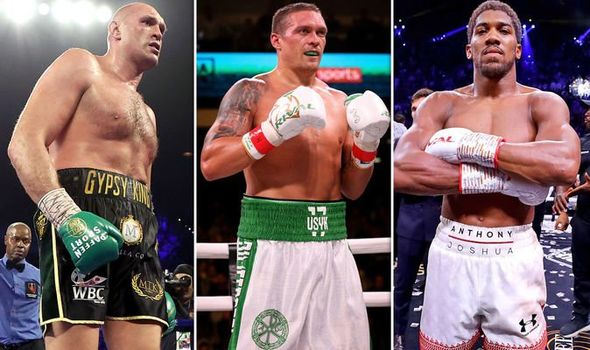 Oleksandr Usyk's co-promoter Alexander Krassyuk told Sky Sports about the Ukranian's plans for the new year, and insists that they still remain focussed on a mandatory shot at Anthony Joshua in April or May next year.

He said: "My prediction, my plan and our strategy is to make AJ vs Usyk in April or May 2021.

"This is the WBO who has the power to enforce the champion for the mandatory.

"Though everyone wants to see AJ fighting Fury I don't feel this fight is likely to happen soon.

"I did not discuss AJ's performance with Usyk yet but must admit AJ looked quite convincing."

The WBO have remained insistent throughout the process insisting that they will not be willing to relax their mandatory rules in order to achieve the goal of setting up an undisputed British title fight between Anthony Joshua and Tyson Fury during next year.

Another obstacle could be the ongoing contract dispute between Fury and Deontay Wilder who is willing to take mediation in order to recieve a third shot at Fury next year as was reportedly agreed on the contract for the second contest.